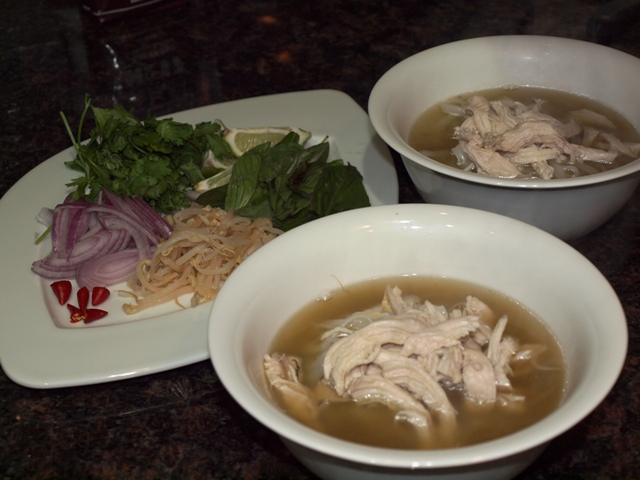 I love pho. To be honest, I don’t remember eating it until I moved to Austin, Texas. Sounds like a strange place to start eating a vietnamese dish, so let me explain. I was just flying back to Texas after a vacation. I had quite a cold, and after hours and hours of flying, I was a congested mess. My boyfriend (now husband) picked me up at the airport late that night and recognized the signs, and prescribed for me a steaming hot bowl of pho. Thankfully, he knew the right place. One of his previously favorite hangouts by his old pad on Burton Drive. Yes, it was kinda a cliché, poorly decorated dive. But it was simple, cheap, delicious, and, despite the time of the night, it was open. 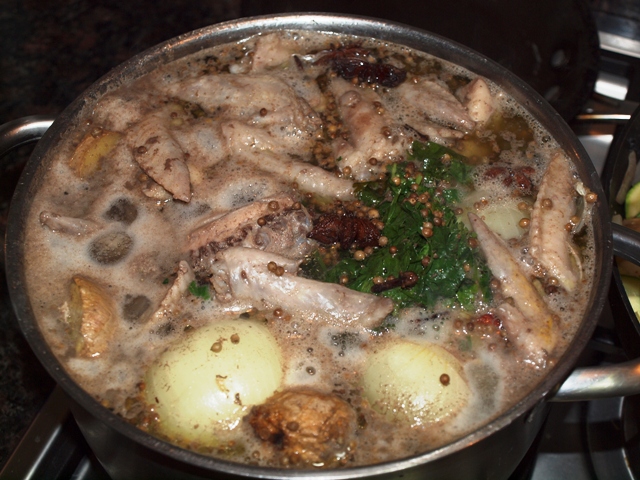 I am not sure if this was my first pho experience or not, but it certainly was the most memorable. As I slurped down the limey, spicy broth (recommended as the way to “sweat out” a cold), I couldn’t help but feel surprisingly better. My sinuses cleared, my throat felt soothed, and as I sat across the table from the love of my life, I felt ready to conquer the world.
Since that experience, every time I feel a little under the weather, I order myself a big steaming bowl of pho. I load it with crunchy bean sprouts, sliced chilis, basil, cilantro, and a squeeze of lime and slurp away. 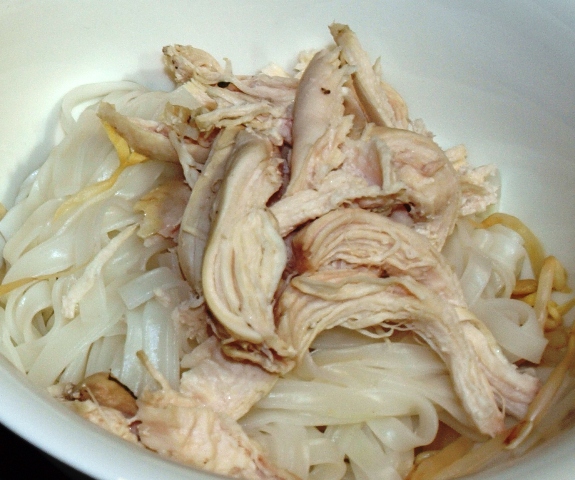 Fortunetely, since arriving in Damascus more than 1 year ago, I haven’t really fallen ill. That is, until last week. And I found myself thinking about pho. Unfortunetely, I haven’t seen any little vietnamese restaurant around here. So, I had to try to make it myself.
I know the list of ingredients may seem a little intimidating, but it is really just the stuff for the broth, the rice noodles, and everything else. Someone told me once that blanching off the bones for 5 minutes first makes a clearer, tastier broth. To be honest, I’m not sure if that’s true because I started doing it that way and since it tastes good, I stick to it and haven’t tried the alternative.
So, next time you are feeling under the weather or just want a heart warming, steaming bowl of soup, try this one. You’re gonna love it! 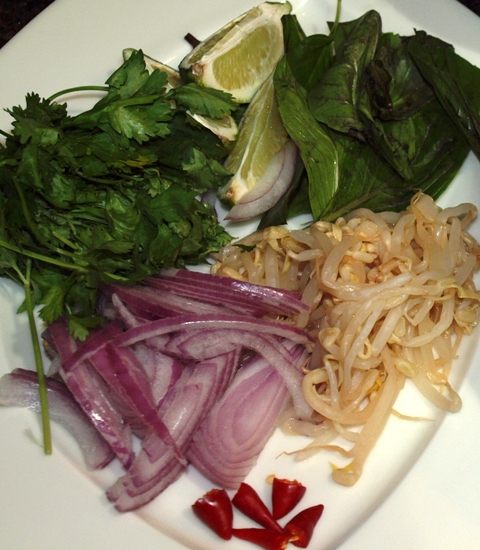 Pho Ga (Vietnamese Chicken Noodle Soup )
Makes 2 steamed bowls of Pho
To make the broth:
1.5 kg Chicken carcasses
2 Large Onions
2 pieces Ginger, 2 inches each
2 tbsp Coriander Seeds
6 Star Anise
6 Whole Cloves
1 tbsp Sugar
2 tbsp Fish Sauce
Stems of 1 bunch of Cilantro
2.5 Liters of Water
The rest of the ingredients:
2 Skinless, Boneless Chicken Breasts
400 grams Dried Rice Noodles
1 cup Fresh Bean Sprouts
Cilantro Leaves
1/4 cup Red Onion or Shallot, thinly sliced
1 Whole Lime, cut into wedges
Sliced Chili
Fresh Thai Basil
Char the ginger and onions on a gas element, grill, or under the broiler. Let cool and peel. Cut both the onion and ginger into chunks. Set aside.
Fill a large stockpot with water and bring to a boil. Add the chicken carcasses and boil for about 5 minutes. Drain and rinse the chicken carcasses and the pot. Place the clean carcasses back into the pot and add 2.5 liters of water. Add the onions, ginger, spices, sugar, fish sauce, and cilantro stems. Simmer for about 2 hours, skimming every 20 minutes or so.
Add the chicken breasts to the broth and simmer for about 15 minutes. Remove and set aside to cool.
Taste the broth. Adjust seasoning with more fish sauce and or sugar. Strain the broth and throw away the solids. Then, my mom’s broth trick… cool it off, put it in the fridge overnight. The next day, skim off all the solidified fat and skum and you will end up with a pretty nice broth. If you don’t have time to do this, you don’t have to, but I think it gives a broth with a better finish and less grease.
Boil water and prepare the rice noodles as per the package instructions. Divide the noodles into two soup bowls, shred the cooled chicken breasts, and place on top of the noodles. Pour the hot broth over top. Add desired garnishes and enjoy.
Posted by Devoted for Life