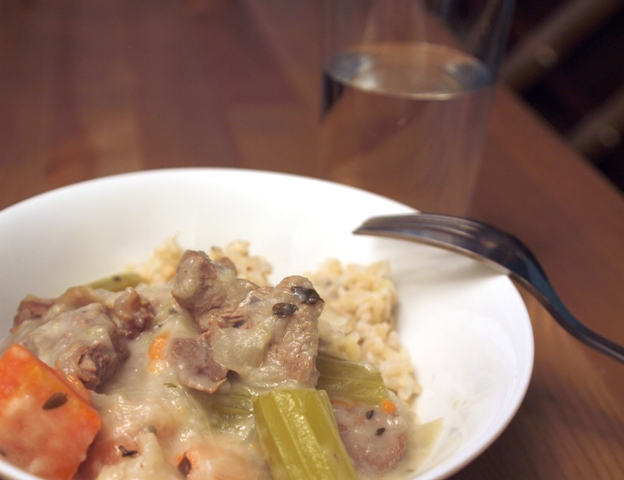 So, the plan was to surprise my husband with one of his favorite meals. A dish his mom used to make for him often, and that he always requests when we go to visit. Blanquette de Veau. It's basically a veal stew or ragout of sorts with a creamy sauce.

The goal was not to make it better than his mom's (because that would be virtually impossible), but just to foster a little nostalgia and warm and fuzzy, like a dish from your past should.

I've got to admit though, the task was a little bit daunting. Not because it's challenging, but purely because of the comparisons that I knew it would draw. But I had to try.

The basis of this dish is veal and mushrooms. Well, it would be if my husband liked mushrooms as much as I (or any French person) does. But unfortunately, this trial wasn't about me or any other French person except my husband, and for that reason, I had to omit the mushrooms.

The verdict? He loved it. So much in fact that despite making enough for a couple of meals, he was disappointed when it came to an end. Next time... there will definitely be a next time!

In a large pan, heat canola oil over medium high heat. Add veal cubes and cook just to brown slightly. Add the carrots, celery, onion, thyme, bay leaf, water and stock. Bring to a boil, reduce heat to low, cover and cook for about 45 minutes, or until veal is tender. (At about the 30 minute mark, stir the whole mushrooms into the pan). Discard the bay leaf and thyme stems.  Drain off the cooking liquid into a measuring cup (it will be about 3 cups or so of liquid).

In a separate pan, melt the butter with the oil. Stir in the flour and cook until golden. Whisk in some of the cooking liquid, about 2 cups worth, to make a slightly thickened sauce. Add the whipping cream, lemon juice, and a large pinch of salt. Stir the veal meat and veggies into the sauce. Serve over rice.
Posted by Devoted for Life