Chicken Shawarma-- A taste of the Middle East 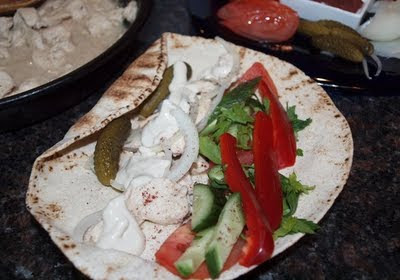 Living in the Middle East, I would be crazy if I didn’t love Shawarma. After all, it is one of the ultimate Middle Eastern street foods. Like hot dogs in North America. They are always around when you need a snack!

So, what is a shawarma? It is basically a wrap of shaved meat and condiments. The meat, which could be chicken, lamb, beef or a mix, is marinated and then stacked onto a huge skewer. This skewer is placed on a very large, vertical rotating spit which cooks the meat using a huge gas element on one side. The shawarma man shaves thin layers of meat off the spit as it cooks, and builds them into a moist and flavorful wrap. The “wrapper” is Arabic Bread, which is similar to pita bread, except a little thinner and chewier (in a good way). He tops this with a garlic tahina sauce, some pickles, and perhaps a few other condiments. 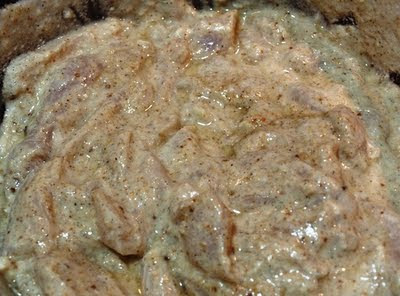 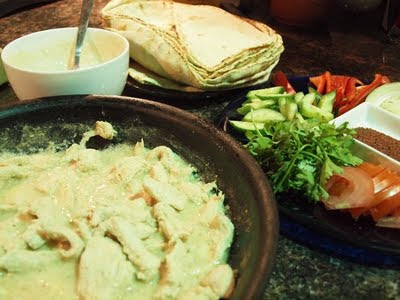 I never believed I could recreate this experience at home. After all, I am not in the business of setting up vertical spits in my living room and tending to large rotating pieces of meat. And, to be honest, you really can’t recreate the shawarma experience—the big skewer of meat, the thin shavings, the feeling you get standing on the street and taking your first bite. But what you can do is recreate the flavors and create a similar end product. I will tell you that right now that it is not the same. But it tastes wonderful and it incorporates all the flavors of the street shawarma in the comfort of your own home. Then, just close your eyes, and imagine that you are standing in the bustling market streets of the Middle East…. 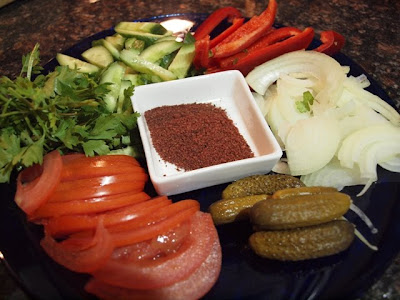 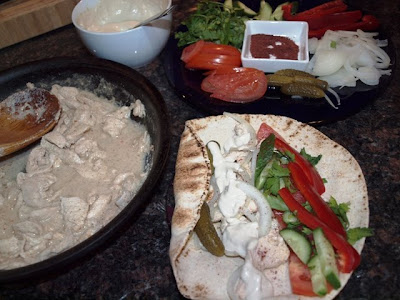 Just a couple of notes before we get started… in this recipe, I am using a Shawarma spice mix. Because it is already salted, I do not add any additional salt anywhere in this recipe. If you can’t find Shawarma spice, don’t worry! You can make your own. Just mix together equal quantities of Allspice, Black Pepper, Cinnamon, Cloves, Nutmeg, Fenugreek. Ginger. Then add a little salt.

The second ingredient I use in this recipe that you may not know of is Sumac. Sumac is a deep reddish purple spice made from the ground berries of a wild bush called Rhus. It has a nice lemony taste and in the Middle East, they use it to add flavor and as a garnish. In this recipe, we use it mainly as a garnish, so if you can’t get it, you can skip it.

In a bowl or resealable plastic bag, combine all ingredients for marinade. Add chicken breast and mix well. Cover and let marinate in fridge for at least 2 hours or up to 24 hours.

In a pan over medium high heat, cook all the chicken and marinade for about 5-8 minutes, until cooked through. Be careful not to overcook as you do not want the chicken dry.

In a small bowl, combine all the ingredients for the sauce.

If you are serving this as a “wrap your own” then prepare all condiments on a plate. You can choose to either sprinkle the vegetables with sumac, or place it in a bowl and let people sprinkle their own. It also adds a nice conversation piece to the table, since most people don’t know what it is.

To wrap the shawarmas, place some chicken in the bread. Add some of the condiments, then drizzle with the tahina sauce. Add a sprinkle of sumac, then wrap. You can wrap each halfway up with parchment paper so they stay together.
Posted by Devoted for Life