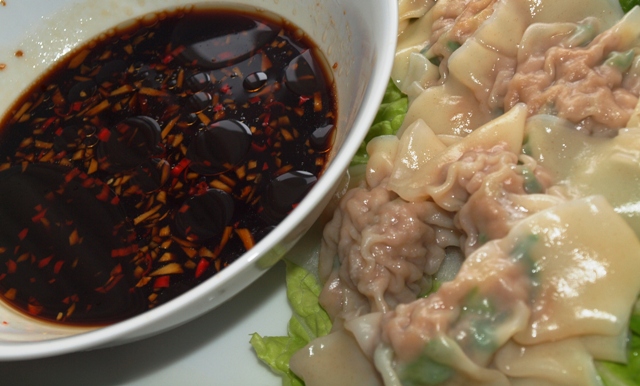 I am always looking for recipes that I can make in quantity and store for days when I don't have much time. This is definitely one of them. In fact, this isn't just a large recipe, it's a HUGE recipe!

Yes, this recipes really does make about 150 wontons! But I did that on purpose. I won't lie.... making wonton is a lot of work. So, I buckle down and spend the better part of a day making a ton of them. Then, I freeze them for many many meals to come.
So, you must wonder... don't they get boring? I mean, especially for two people? At about 6 wontons per person per meal, that is 25 meals, or about 13 meals per person of the same thing.
But it doesn't have to be boring. Wonton can be cooked and served so many ways that they become a freezer staple. 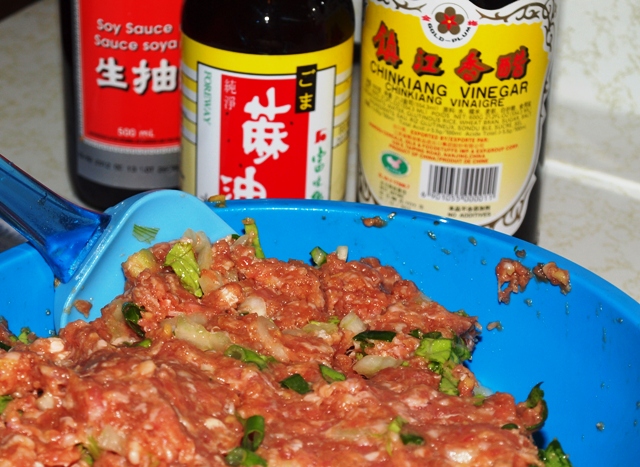 Wonton
Made about 150
For the Filling:
750 grams Ground Pork
500 grams Ground Chicken or Turkey
2 Egg Whites
1/3 cup Water
1/3 cup Soy Sauce
2 tbsp Chinese Black Vinegar
1 tbsp Sesame Oil
2 1/2 tbsp Ginger, minced
1/3 cup Cornstarch
1 tbsp Brown Sugar
1 1/2 tsp Salt
1 tsp White Pepper
2 cups Napa Cabbage, chopped (white and green parts)
1 cup Green Onion, chopped (white and green)
150 Wonton wrappers
In a large bowl, thoroughly mix together all filling ingredients. Cover and place in the fridge for about 45 minutes. Once the filling has sat for about 45 minutes, I usually taste it, either by cooking a bit in a non-stick pan, or making 1 wonton just to check the seasoning. This is entirely optional, but if you are about to spend the time to make dozens of them, I just think it's better to double check that you are happy with the taste!
To fill the wontons, place 1 rounded teaspoon of filling in the centre of the wrapper. (You might feel that this doesn't look like a lot of filling, but do not add more! When you try to close the wonton, the filling will push out creating a mess!) 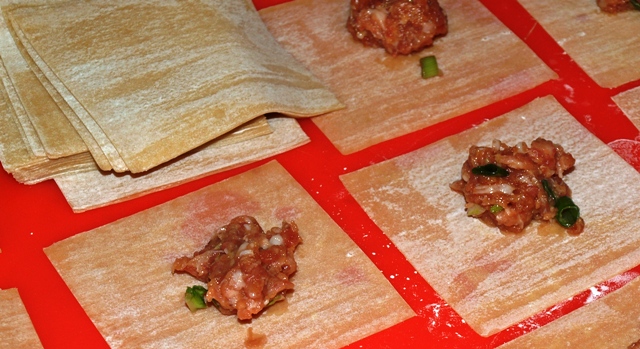 Brush all of the edges of the wrapper with water (I use my fingers by dipping them in a bowl of water, but you could also use a brush). The fold as desired. Here are the 2 folds that I prefer:
1. The basic triangle fold- bring 2 opposite corners together and press the wonton wrapper together around the filling, making sure to push out all the air.
2. The purse fold- bring all 4 corners to the centre and stick together, push all the air out, and press each set of edges together. 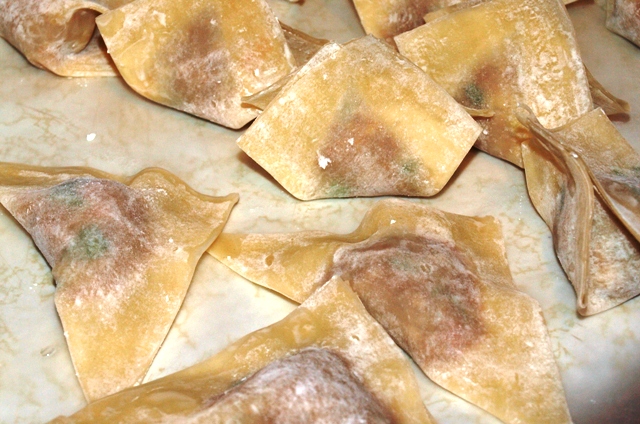 Place on a wax paper lined baking sheet.
At this point, there are many directions you could take with these. You could cook them (either boiled, fried, or in soup), or you could freeze them for later.
To Boil or Steam
Bring a pot of water to a boil. Drop the wonton into the water, being sure not to overcrowd the pan. Bring back up to a boil, then reduce to a simmer and cook for about 4-6 minutes until the filling is cooked through. Remove the wonton from the water with a slotted spoon, trying to remove as much excess water as possible. Serve with Wonton Dipping Sauce. 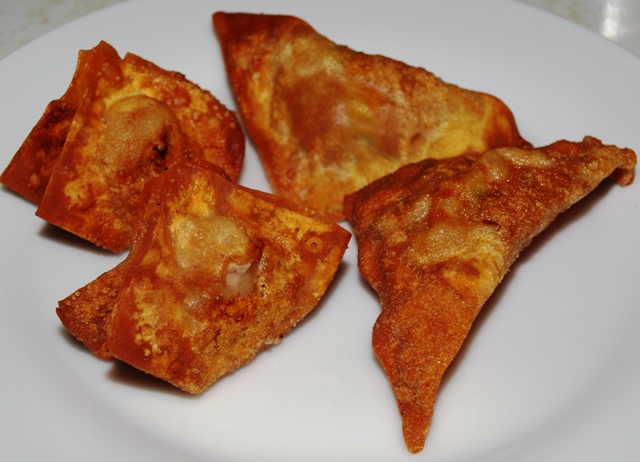 To Fry
Heat a pot of oil or fryer to 350 degrees. Place the wonton in the oil in batches, being sure not to overcrowd. Fry for about 4-6 minutes until the wonton are golden. Great served with sweet and sour sauce, chili sauce, or wonton dipping sauce.
In Soup
Blanch the wonton for a couple of minutes in boiling water. Drain. Place the wonton in your soup broth and finish cooking. Spoon broth and wontons over shredded napa cabbage and cooked egg noddles. Drizzle with sesame oil and garnish with green onions.
To Freeze
To freeze, place the wax paper lined baking sheet with the wontons directly in the freezer. By freezing them first on the sheet, it will ensure that they freeze individually instead of sticking together. When they are completely frozen, place in a container or ziplock bag.
To cook from frozen, boil, fry, or place in soup just as above. Just note that they will take a couple extra minutes to cook.
Wonton Dipping Sauce
1/4 cup Soy Sauce
1/4 cup Chinese Black Vinegar
1/2 tbsp Ginger, minced
1 Small Red Chili, seeded and chopped
1 tsp Sesame Oil
Just mix all the ingredients together! That's it!
Posted by Devoted for Life