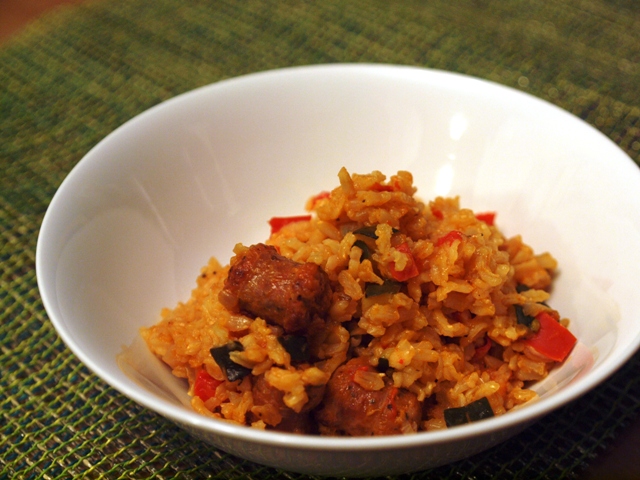 People always ask me how I decide what to make. And to be honest, it really depends.

Sometimes I get inspired in the grocery store or market, buy a whole bunch of stuff and then make up combinations on the fly depending on what I bought and what's left in my kitchen as the week goes on.

Other times, I read a book or see a recipe and that inspires me to go shop for specific ingredients (and of course, during that trip, I usually pick up lots of other stuff which I will find ways to use throughout the week).

There are times when I might just start to crave a specific taste or texture, often some form of comfort food, and try to replicate that nostalgic feeling.

But the other day, I asked my husband what he would like to eat. He often lets me know what he feels like or makes mention of a favorite dish, and I try to accommodate it into my crazy "to make" cooking/baking list" but it is very rare that I come right out and ask him point blank. But and did. And one of the things he mentioned was sausages with rice and tomato cooked together like his mom makes. Of course. It has to be like his mom's. And of course, I know that I can never come close to replicating his mom's cooking.  But, I thought I would give it a shot from my memory of this dish.

So, what came of it was a rice dish with merguez and small diced vegetables. Merguez is a sausage that I was introduced to the first time my husband took me home to France. It was typical barbeque fare with a few beers and an open fire.  I actually thought that it was a French sausage for the longest time. Made primarily with lamb (but often mixed with beef or pork), this is a thinner, very flavorful and spicy sausage which I found out was originally made in parts of North Africa.

I managed to find some pretty good ones here, and decided it would be the perfect sausage for this dish. Because it is made primarily with lamb, it tends to be on the drier side, so it works well cooked in the rice as it is here.

The verdict? My hubby liked it, but shortly after, called his mom for her recipe. He assured me that it was just because he wanted the one his mom makes.

In a medium sized pot, heat about 1 tsp oil over medium high heat. Cook the sausage pieces until browned on the outside (2-3 minutes). Remove from pan.

Add another drizzle of oil to the same pan and add the garlic, pepper, zucchini and onion. Cook, stirring until the vegetables start to soften, about 4 minutes. Stir in the tomato paste and season with salt and pepper.

Add the sausage pieces back into the pan. Stir in the brown rice and water. Bring up to a boil, reduce the heat to medium low, cover, and let simmer for about 25-30 minutes until the rice is cooked and there is no excess liquid in the pot. Remove from heat and let sit, covered, for about 5 minutes.
Posted by Devoted for Life