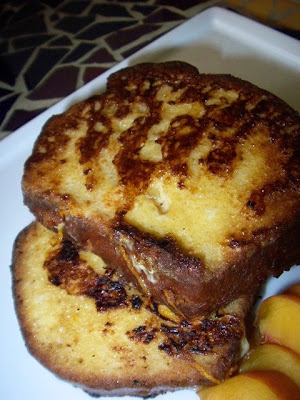 Of course everyone that read my posting last week made Brioche, right? I mean, my husband found time to make it, so I am absolutely positive you all did too. And if you didn’t, well, you are certainly going to miss out on this one!
Today, with that piece of uneaten brioche sitting on the counter (which I am sure that you have considered tossing but never got around to actually doing), we are going to make some French Toast. And not just any French toast. We are going to kick it up with a little fresh orange zest and vanilla! Yum yum!
Before we begin, I’d like to start by discussing this topic of “French Toast.” I mean, we have all eaten it as kids for breakfast, and you can find it on most breakfast menus in pretty much any hotel or diner in any city around the world. But where did it come from? I mean, is French toast even French??
After some research, I have found that the birthplace of what we call “French Toast” today is up for debate. I guess everyone wants to take credit for this delicious breakfast staple! But the reason by which this interesting concept began is agreed upon by most... It originated as a way to use stale bread. By coating the bread in egg, then frying it, the bread became edible (Actually, edible is an understatement... the resulting bread is irresistable!).
In France, this type of bread dipped in egg is not even called French Toast (or i guess you could say, Toast Francais). It is actually called "Pain Perdu" (literally "lost bread" referring to its ability to use the lost or old bread). 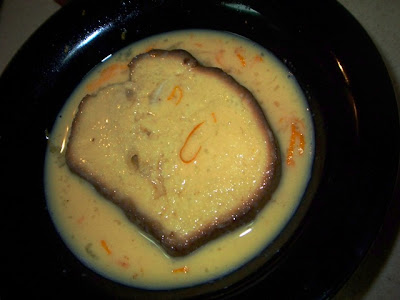 Anyway, does it really matter? I mean, whatever it’s called and wherever it came from, it is so so good. Here are a few tips for making what I think is the best French Toast.
The Type of Bread: Of course, you could use any old bread you have lying around, but brioche makes the best French toast. When the bread soaks up all that eggy milky goodness, it really gets a second wind, and becomes a beautiful breakfast, lunch, dinner, dessert, or snack.
The Age of the Bread: As mentioned before, French Toast was created to use up old bread. Now, some of you are probably thinking... "if the recipe tastes good with old bread, it must be just divine with fresh bread!!" WRONG! You really need to use day old bread to get the best end product because old bread keeps a firm texture even after the dip in egg. If you use fresh bread, which is already soft, the end product is just a soggy mess when it comes out of the pan, let alone when you douse it in maple syrup...
The Cut of the Bread: Now, I like to cut the brioche quite thick, about ¾ of an inch thick. The reason? Because even after soaking up all that liquid, the bread still maintains a great shape and texture. If you cut it too thin, you get soggy French Toast (again...). Are you getting the message here? The idea is to have French Toast with texture, not a puddle of soggy bread and fried egg on your plate.
Condiments: Okay, this isn't really a tip. It's more of a preference. But I highly recommend you serve this French Toast with real Canadian Maple Syrup. Yup, the good stuff. And I am not being biased because I am Canadian. I am just telling the truth. Try it, then you will taste what I'm talking about. 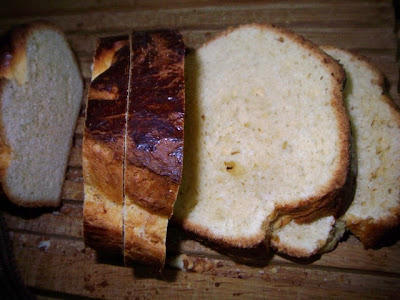 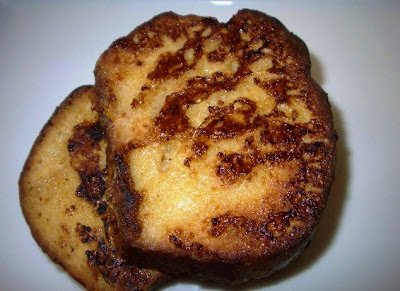 Beat together all ingredients.
Heat a large, non stick skillet over medium heat. Add about 1/2 tbsp butter and a drizzle of vegetable oil (you could use just butter, but the oil helps prevent it from burning. You could also use just oil or non stick spray, but to be honest, it's not the same. The butter adds flavour!).

Place a slice of brioche into the eggy mixture, let it soak for about 10-15 seconds, then flip it over for the same amount of time so that the other side soaks up some goodness. Place the egg soaked brioche into the heated skillet and cook on both sides until golden (about 1 minute per side).

Eat immediately plain, with maple syrup, or your condiment of choice.
Posted by Devoted for Life