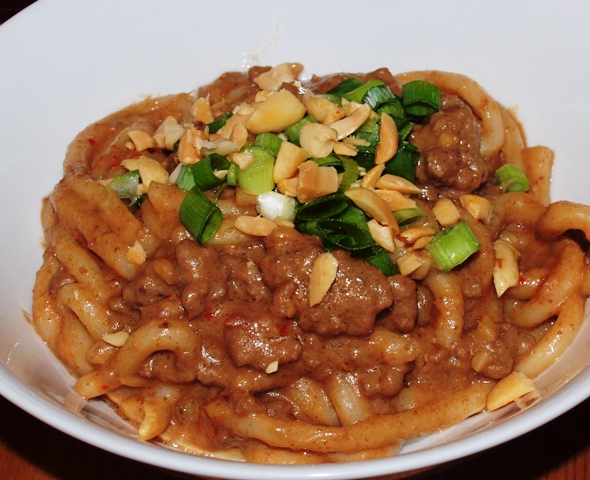 One night, I went for dinner at a place in Vancouver that makes handmade noodles called Peaceful Restaurant. Let me tell you, the food was fantastic. So tasty and exactly what I wanted.

However, there was one small issue. It was packed. And I mean packed, line up out the door kind of packed. So packed in fact, that when we were ordering, the waitress asked us if we would want anything else because they only allow you to order once. Basically what she was saying is to order, eat and leave because there were other people to feed.

Despite the rushed experience, the food was delicious. Especially one of the dishes called Dan Dan Noodles. It was basically ground beef in a spicy peanut sauce tossed with homemade noodles. After finishing the noodles, we practically lifted up the bowl and drank and sauce it was so good. So, from that moment, I decided I had to recreate it.

I didn't make my own noodles when I made it at home. In fact, I used packaged udon noodles. However, I am sure in Asian markets you could buy fresh hand pulled noodles if you wanted to.

This was so quick and easy to make, and the fact that I could sit on my couch and eat my noodles at my own relaxed pace was the icing on the cake!

With a pestle and mortar, crush the garlic, ginger, peanut butter, soy, brown sugar, sesame oil, vinegar and chilli until it forms a paste.

Heat a pan oven medium-high heat. Add the ground beef and cook until browned. Add the peanut butter paste to the beef and cook for a few minutes. Stirring, add the chicken broth slowly to form a creamy sauce. Let cook for about 3-5 minutes. Turn off the heat and set aside.

Boil a pot of water (enough to boil the noodles). Once boiling, add the noodles and cook for about 1-2 minutes. Drain and add the noodles to the sauce. Toss together. Serve garnished with chopped peanuts and green onions.
Posted by Devoted for Life