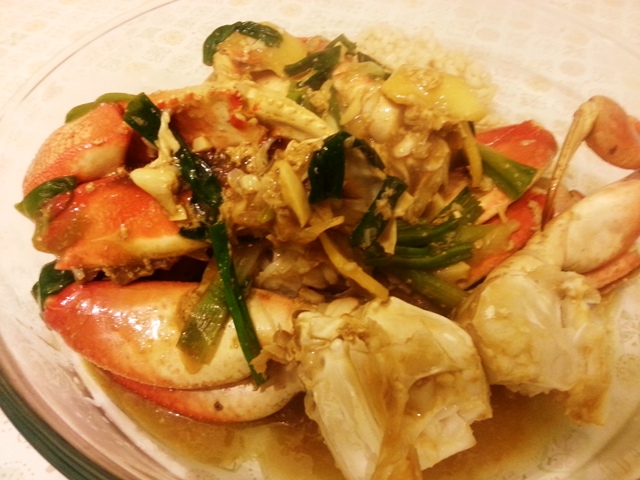 So here's the thing. I was craving stirfried crab. And the thing about me is that once I get something into my head, especially with regards to food, I just have to have it.

Now, it would have been easy if I was craving pizza or pasta or fruit. But crab? Asian style? Go figure.

For anyone that loves crab, you know that it is darn expensive to have in a restaurant. So, I decided to see if I could make it myself.  I went to my local grocery store where I remembered seeing fresh crab and lobster tanks, and sure enough, my memory did not fail me. However, when I asked if they could kill it for me, they said they couldn't and also reminded me that it would taste far better if I did it myself right before cooking. Yikes!

So, with plastic bag containing crawling giant crab in hand, I headed home. First thing I had to do was figure out how I was going to kill it. According to sources on google, putting the live crab in the freezer for about 20 minutes stuns the crab and it doesn't move as much, so I tried that. 20 minutes later, the crab was still moving, I almost think more than it was before!


Sigh... I knew what I had to do was just flip it over and jab it. But, I totally wimped out and couldn't do the deed. So, I decided that although I might need to compromise a bit on taste, I would slightly pre-boil the crab first to kill it, then cut it up and stirfry it. Not ideal, but what can I say? I chickened out!

Here is the recipe assuming that you are going to kill the live crab, cut it into pieces and stirfry it. If you are a chicken like me, follow the same recipe with the half cooked crab pieces. It will still taste good, but isn't really the way it should be done.

In a small bowl, stir together soy, oyster sauce, water and cornstarch. Set aside.

Heat oil in wok or large pan. Add garlic, green onion and ginger and stirfry until fragrant, about 2 minutes. Add the crab pieces and cook until the crab starts to turn red. Quickly stir the cornstarch mixture to ensure cornstarch is dissolved. Add to wok and let sauce boil and thicken. Serve with steamed rice.
Posted by Devoted for Life