I would not call myself a baker. Baking requires patience, precision, and time. Now, I am not implying that I don’t have these attributes, but when one must compare the adrenaline rush attained from cooking versus baking, cooking surely takes the cake (pardon the pun…). 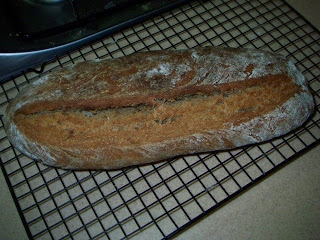 Cooking is accommodating, allowing for creativity, the odd mess up, and the chance for recovery. Taste, adjust, taste, adjust… this is the cooking mantra. Of course, you do require a basic understanding of ingredients and flavor and perhaps a little technique, but a little goes a long way in cooking. Understanding just a few methods and ingredients and playing around with them could satisfy you for weeks on end in the kitchen.
Having said that, today is a day for baking. In general, I bake very little because I don’t like to use recipes, and baking requires a recipe. Like most people, I don’t fully understand the chemistry behind baking, and therefore, cannot even hope to “create” a baked good, or even severely alter a recipe, without affecting the results. However, one baked good which does intrigue me and feed my creativity is BREAD!

My History with Bread
Even before the days of fad diets like Atkins and South Beach, I haven't always been interested in bread. Having grown up in Canada, my bread repertoire as a child consisted of sandwich bread (white and whole wheat) and what the supermarket called “French bread”--- this spongy, soft, white loaf which really has no resemblance at all to the bread available in France.
After travelling and marrying (indeed, a French), I have discovered the real bread, a complement to every dinner table in Europe. It is certainly not the spongy white mess that I remember, but a hearty, rustic loaf, perfectly browned on the outside, and with a beautiful texture and crumb on the inside. Made of white, wheat, rye, corn… it doesn’t matter. The results are beautiful, and thus, my journey to bake bread began.
My Bread Journey
Only a few months ago, I began this journey to bake a great loaf of bread. And I don't mean the perfectly uniform, square, bread machine loaf. I am referring to the rustic, country loaf, baked in the village boulangerie, the smell of which drifts into the thick morning air and guides a population of inhabitants to purchase it every day.
First, I tried the way I had learned in hotel school, using active dry yeast in warm water, letting it bubble, and mixing it in to the flour. Already trying to “do my own thing,” I altered the recipe to use 100% Whole Wheat Flour, and ended up with a loaf as dense as a brick and with a prominent yeasty aftertaste. Not good…. 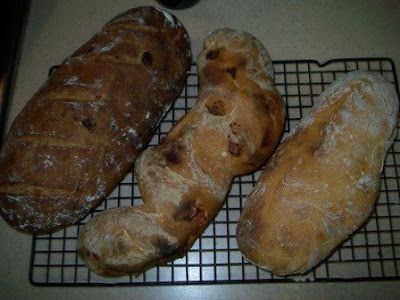 Picture Above: Three Great Loaves- Rosemary & Sundried Tomato, White, White with Grainy Mustard & Cheese
Take two: After watching my in-laws make bread with dried bread yeast, just chucking it into the bowl with the flour, I decided to try this method at home (again, with 100% whole wheat since apparently I didn’t learn anything from my first attempt). The result? Better, but still dense and yeasty. After multiple attempts, I arrived at a loaf which could pass as bread, but did not satisfy the craving for that crunchy crust and soft, textured crumb.
Then it happened. For Christmas, my forgiving husband (anxious for me to learn the tricks of the skilled boulanger so that he could reap the benefits) gifted a beautiful book to me called The Handmade Loaf

by Dan Lepard, containing bread recipes, explanations of the science of bread, and bread technique. Admittedly, this book was seriously intimidating at first. In fact, for almost one month after receiving this book, I continued on my old bread ways, convinced that the recipes were far too complex, calling for ingredients that I had never heard of or didn’t know where to buy. Natural Leaven? Fresh Yeast? Malted Grains? Barm? The recipes were written in percentages also, as if I was going to calculate what percentage of ingredients I was going to use!! Right! Like I don’t have a day job!
But, I gave in to the “pressures” of my husband, who wanted to be sure that I liked his gift, and wanted to taste the results. So, over the following six days, I cultured my own leaven, which I came to find is a simple mix of flour and water which ferments naturally with relatively little work. Dan Lepard also adds a few other ingredients (yogurt and raisins) which he deems create a nice leaven but as I didn’t have those items in my kitchen at the time, I did without. Seeing my mixture activate as the days passed was enough to get me interested in the bread it could produce. And boy did it produce! I followed the Mill Loaf Recipe, using a mixture of white, whole wheat, and rye flour and had my first taste of real bread success! Great texture, no yeasty taste, and beautiful crust.
(Picture right: White Maize Loaf)
Since that first successful loaf, I have made many others, all inspired by this great book The Handmade Loaf

by Dan Lepard. And I have come to understand why percentages matter (they allow me to be creative by giving me boundaries by which to play with), the difference between flours (no wonder 100% whole wheat didn't work out for the amateur!), how steam creates a crisp outer crust, and how a little time and patience really pays off in the bread world. Best of all, I have learned that bread can be an outlet for my creativity just as cooking can. Because, bread is like a blank slate which I can decorate any way I like! So, off I go to bake some bread!
Posted by Devoted for Life