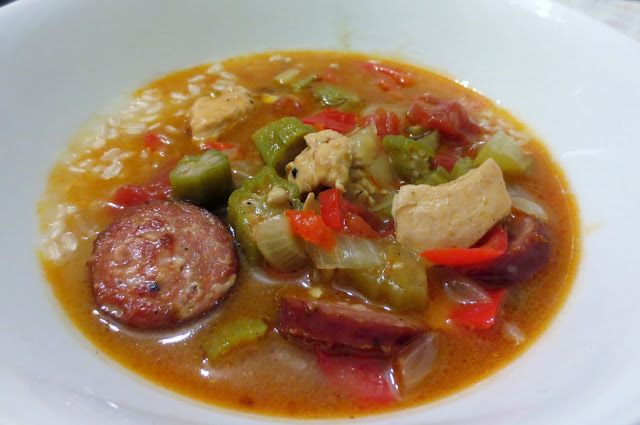 It's getting cold outside. This means, that it's time for some heartwarming soups. Thankfully, I had anticipated this need a couple of months ago before our little one arrived and made a huge pot of gumbo, portioned it, and froze it for times like these!

Okay, perhaps it was more of a craving than anticipating my future need. But whatever the case, I made lots, ate a bunch and froze the rest. And I sure am thankful for it now.

The first time I had gumbo was actually when I lived in Austin. I worked in a restaurant that served this amazing seafood gumbo. It was slightly spicy, and so flavorful and rich. I have thought time and again of trying to recreate it, but never gotten around to it. Then one day, I was wandering around the grocery store and saw that Campbell's had a Chicken and Sausage Gumbo. I thought I would try one. And to be honest, for store bought soup, it was delicious. But it also furthered my determination to make my own.


So one day, while I was about 9 months pregnant and just waiting to pop, I decided to do it. And boy, am I sure thankful I did. It really was a one pot wonder that filled my house with amazing aromas, and like many of the dishes I love, is really no more work if you are making a huge pot, so I say, fill the biggest pot you can find! It freezes great, as evidenced by my dinner last night, and it has now been added to my list of must haves in the freezer.

Try it! You will not be disappointed. Especially in this weather!

Season the diced chicken breast with the cajun seasoning, salt and pepper. Heat the oil in a large pot over medium-high heat and cook the chicken until browned. Remove from the pot and set aside.

In the same pot, add the sausage slices and cook until browned. Remove from the pot and set aside.

Add the butter to the same pot, still over medium high heat, and melt. Add the flour, stirring constantly until the roux browns. Add the onion, garlic, bell pepper, celery and a large pinch of salt and cook for 10 minutes until softened. Add Worcestershire sauce, diced tomatoes, chicken broth, okra and the diced chicken and sausage to the pot. Bring to a boil, then reduce the heat, cover, and simmer for about 1 1/2 hours. Serve over brown (or white) rice.

Or, freeze in portions for later. Reheat over the stove, adding a little extra broth if necessary. Cook fresh rice when you are ready to serve.
Posted by Devoted for Life